Skip to content
Home » Our Blog » The Jargon Trap: How to Navigate Using Jargon in Your Content Marketing

The Jargon Trap: How to Navigate Using Jargon in Your Content Marketing

Google “use jargon” and “jargon sucks” and you’ll find out everything you need to know about jargon in content marketing. And what’s that? That it is usually something to avoid. For some reason, small and mid-level brands have gone overboard with jargon in recent years. Let’s look at what jargon is, why you should avoid jargon and some examples of why it is so utterly cringe-worthy.

By definition, jargon is essentially a language within a language used by people in the same area. It is made up of specific terms that make sense within a defined group but make no sense outside of that group. Within a closed group, is often the accepted way of speaking. For example, here at Digital Firefly Marketing, we use digital marketing jargon. This eliminates any question about what we’re discussing. If I use the word “analyze” in a call with a colleague, she knows exactly what I’m talking about and we save time. We also use application-based language that has become our own hyper-local jargon, like when we talk about SEO. I would not, however, use “make it green” with a client or lead. They would have no idea what I’m talking about. Worse, they might mishear it as “make it rain” making things awkward for everyone involved. With a new friend also in digital marketing or a potential collaborator, I would use digital marketing jargon, thus making communication easier. Because sometimes jargon is good.

There are times when jargon is helpful. Going back to the definition, it’s all about terms used by people in a closed group. For example, if you are in the emergency room and overhear, “We need oxygen, stat!” you’ll know what it means but it’s not directed at you. This is a quick way for medical professionals to communicate. Jargon like this is helpful because no matter what hospital a medical professional goes to, the language is the same.

This also applies to law firms and Hollywood sets. In fact, knowing the jargon is helpful before starting to work in one of these places because you’ll blend in seamlessly.

In these cases, everyone speaks the same language and knows the definitions. Actually, if someone were to come in and not use the jargon of that specific group it would be confusing and inefficient.

In a closed group with accepted ways of speaking, then, jargon is good. It’s a helpful way to make sure that communication is efficient. Outside of this very specific example, though, jargon is a terrible idea.

Despite the definition of jargon being clear and readily available, people have injected it into every aspect of their speech. Go into a staff meeting at a school and you’ll hear principals addressing teachers and support staff with business terms like “core competency.” This is a problem. First, the term is widely considered, including by experts like Forbes, to be one of the most annoying terms out there. Second, it isn’t an appropriate educational jargon. Why not?

Core competency is a fancy way of saying strength. Perhaps primary strength. The problem, though, is that core is unnecessary. The second, is that competence is a terrible word to use in place of strength. Competence is being able to do anything. It’s not doing something well. Is that what you want to say about yourself? That you can do something? Or that you do it well? Maybe, that you do it best.

Broken down, there are three issues with using jargon. First, unless your audience is part of your group, jargon is not efficient. Second, much of the jargon that has made its way into daily language makes zero sense. Third, jargon can be culturally isolating. While it may be easy to throw in and make your content marketing sound catchy, it often makes no sense. Or even worse, when jargon is looked at closely it could send a message opposite to that you’re trying to convey.

The Science of Deception

When it comes to the brain and jargon, an interesting parallel exists. Many of the reasons you don’t trust a person, be it a date or a technician, are cues that come from their spoken language. The American Psychology Association has researched thousands of examples of deception and how we sense it. While many of them rely on facial tics, posture changes and micro expressions, there are questions about how accurate these are. What does come up, explained in depth in this excellent article from Fraud, are the language giveaways. When language is all you have like in content marketing, it’s vital that you avoid anything that sounds deceptive. And guess what? Jargon fits the bill. Jargon plays with language to say something in a new way. But why not just say what something is? Clear, straightforward language is regularly believed to be more truthful, even when it doesn’t make sense.

The Absolute Worst Jargon: Never Use These in Content Marketing

How do you know if you’re using jargon? If you’re saying something in a “clever” way, chances are you’re letting jargon slip in. Here are 33 of the worst examples of jargon grouped by the reason to avoid them as well as how to replace them with plain, clear English.

Pretentious jargon is made up of terms people use to sound smart but can end up being elitist and isolating. They are often met with an eye roll. They are also flagged as deceptive by many because a simpler word could be used and yet is being avoided. 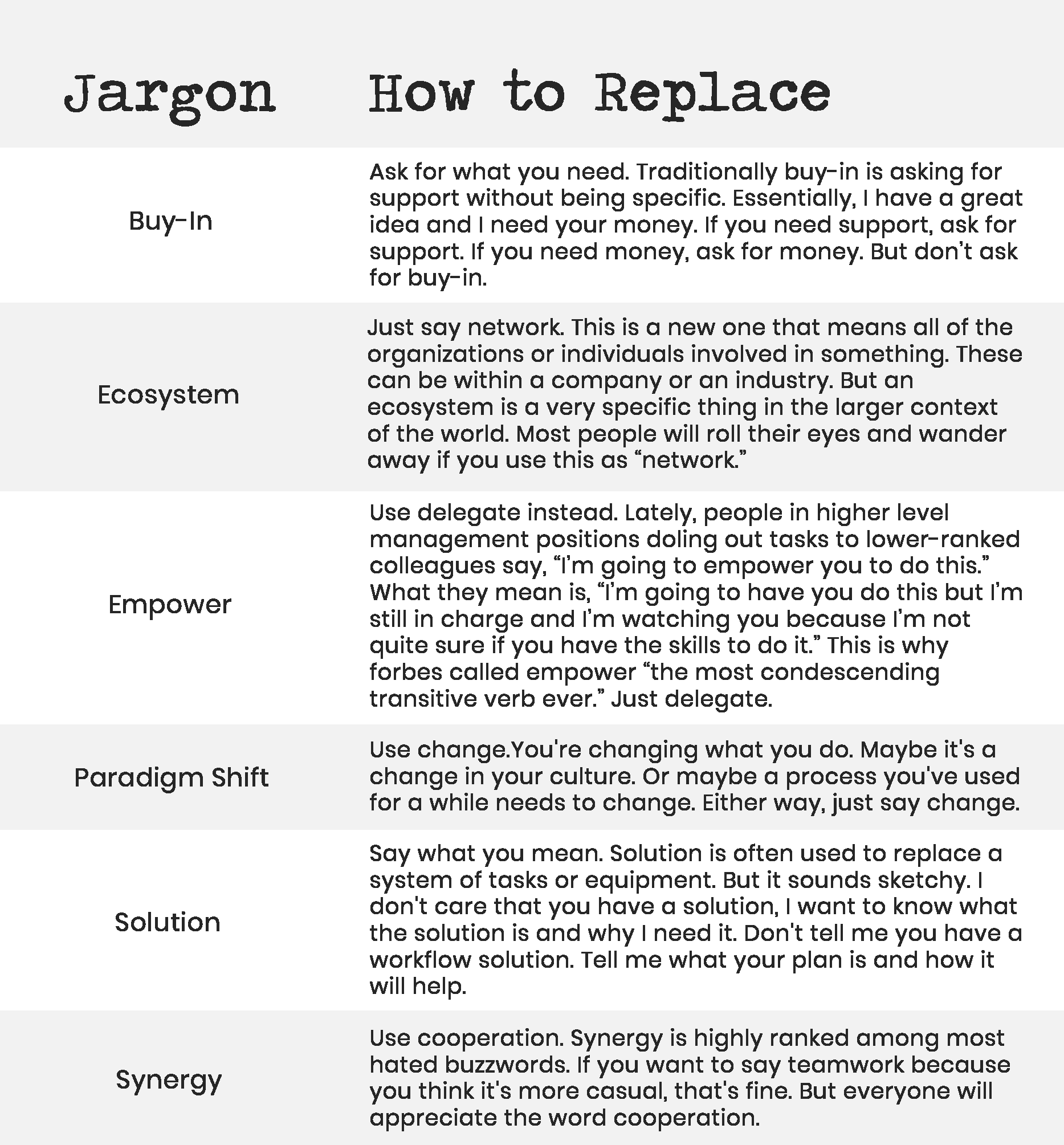 Some jargon might be clear, even to those who are outside of a closed group. But is it necessary? A surprising amount of these catch phrases simply require more words than necessary. And while people may know what they mean, you run the risk of turning people off because you’re just overtalking. In these cases, it’s usually best to be concise. 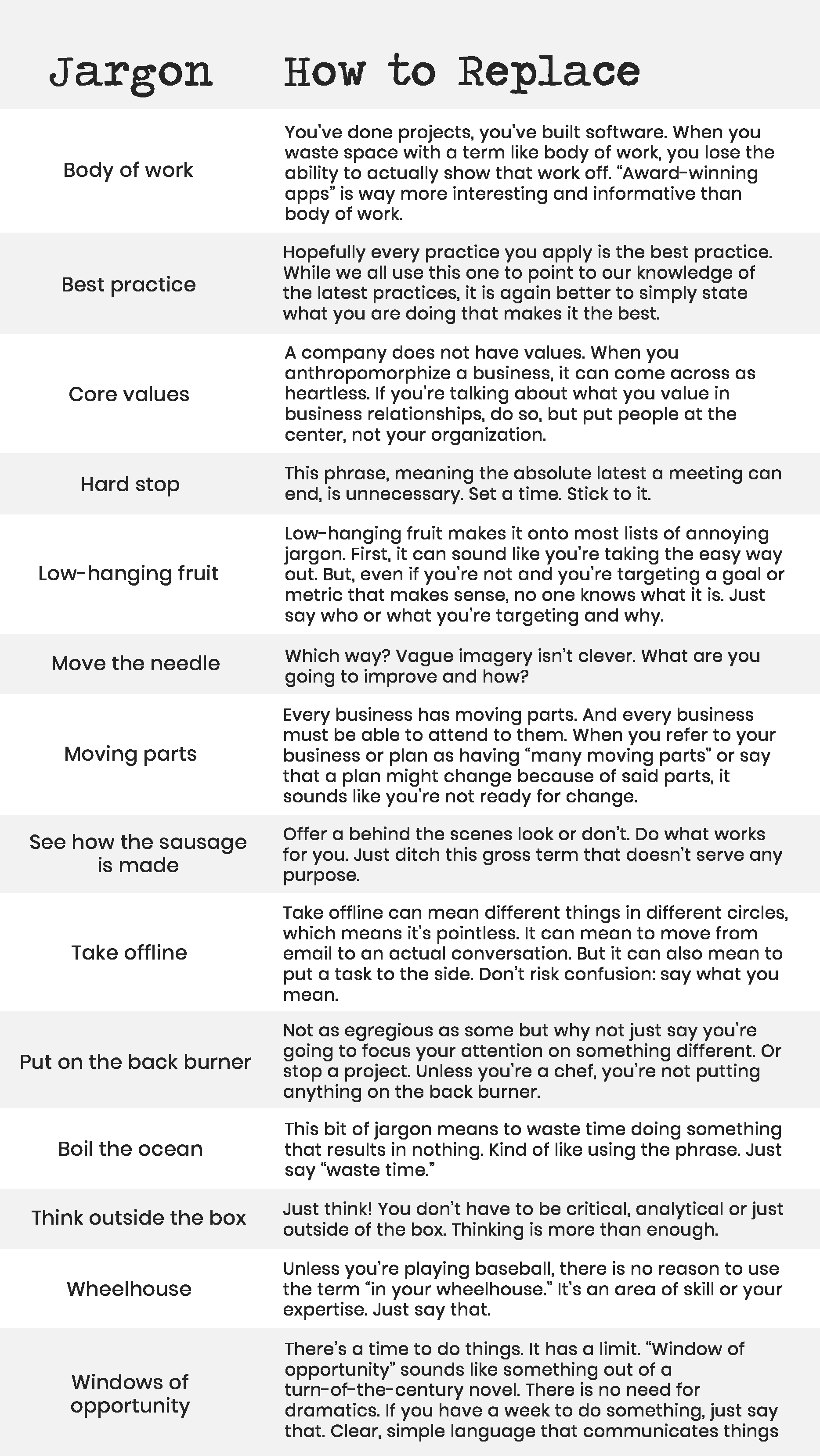 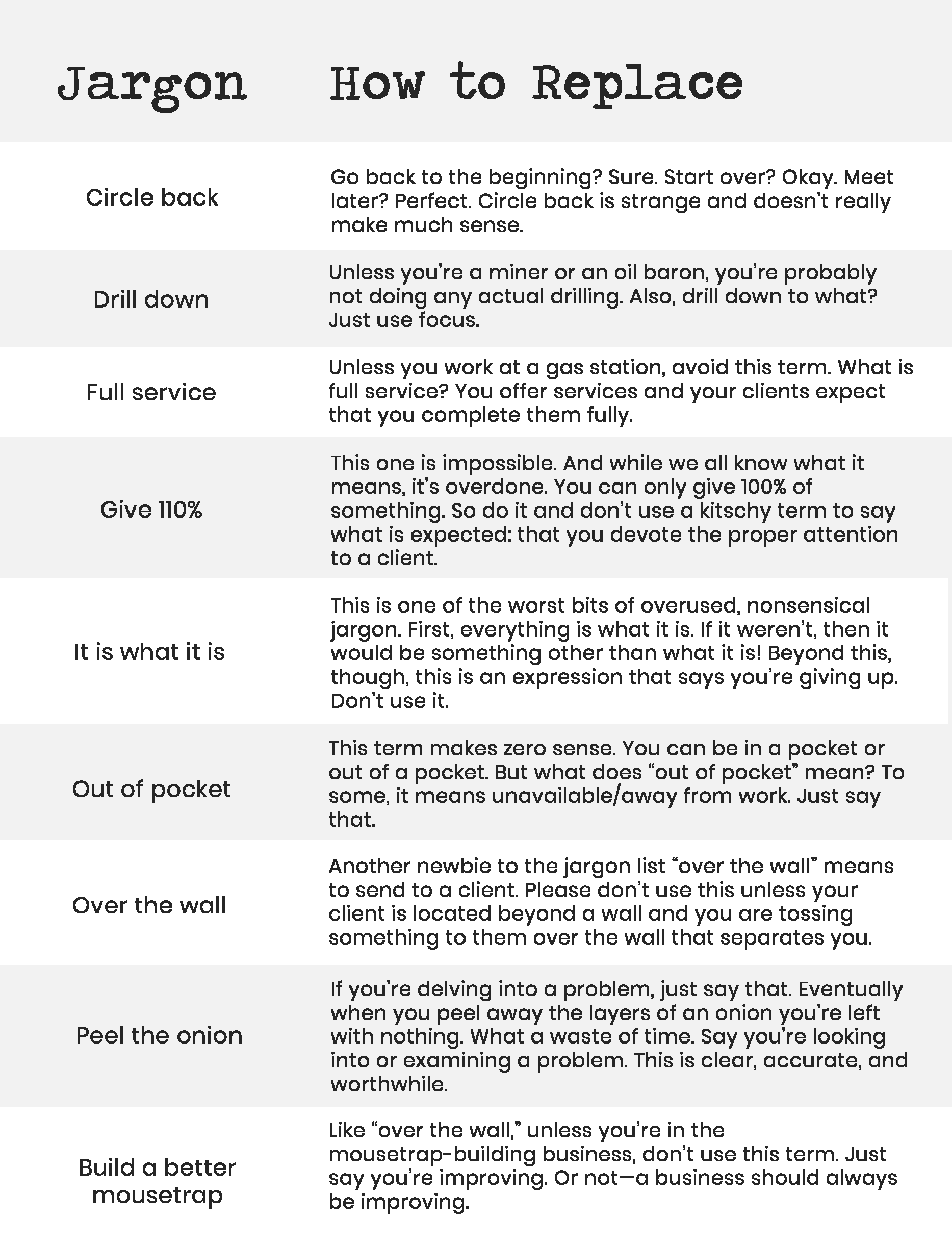 In addition to jargon being bad because it can be misunderstood, or because it is pointless and signals deception, there are also times when jargon is incorrect. It diminishes the quality of your writing.

Some jargon is downright wrong. While people stop using terms that are clearly offensive, some jargon hangs about because people think it’s okay since it is a figure of speech. Here are some to stop using now, all of which classify as microaggressions. 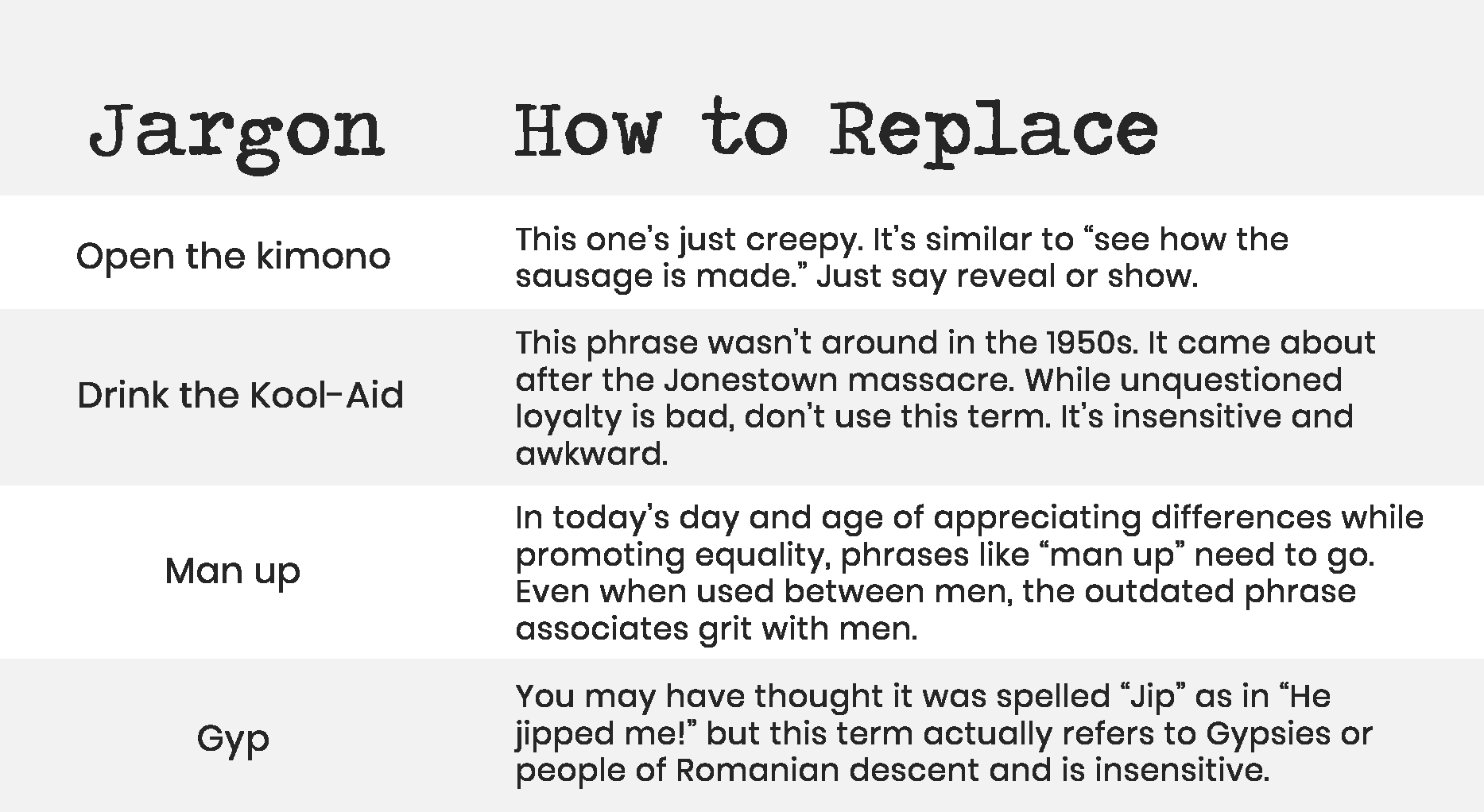 At the end of the day, content marketing is a communications game. Clever wording works when it’s original, fresh and easy to understand but keep it to a minimum. And unless you’re marketing to people in your industry who speak the exact same language as you, avoid jargon at all costs.

Ready to create some awesome content Google will love?