Skip to content
Home » Our Blog » Firefly Feature: The Benefits of Social Media for a Small Town and a Smaller Dog

Firefly Feature: The Benefits of Social Media for a Small Town and a Smaller Dog

Social media is more than a popularity contest. It can be a powerful medium for educating people and engaging with communities.

Social media affects every aspect of our lives. Many times, it does this in good ways.

The Benefits of Social Media in a Crisis

Hopefully it never happens to you, but people living in a crisis area are able to check in as “safe” on Facebook. Currently this is the case with the California wildfires. Rather than call everyone to check in—or have a million calls and texts come in when there are more important things to focus on—residents simply mark themselves as “safe” and their network is notified.

In addition to notifying people of individuals’ “safe” status, social media makes it easy to affect change by getting donations of money and items for disaster victims. And, it’s not just large-scale crises. Community pages allow residents in a city, town or even neighborhood to post information about families or neighborhoods in crisis.

How Knuckles Benefited from Social Media

Social media helps in the strangest ways. One of the DFM family recently had a social media experience that helped educate and engage the community. Director of Content, Nancy Koziol, and her husband, Kris, rescued a dog ten years ago. The dog was, well, a train wreck. While training and love brought out his amazing personality, Knuckles is still fear aggressive toward dogs. After Nancy had several people try to approach her with their dogs saying, “My dog’s great at calming other dogs down!” or yelling at Knuckles to quiet down, she posted on her town’s Facebook page. 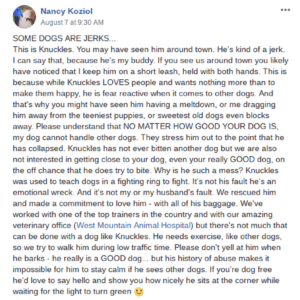 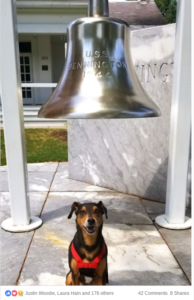 With nearly 200 reactions, 42 comments and 8 shares (which generated conversation on other pages) much of the community realized that other dogs can pose a risk to their good dogs, that good dogs come in all shapes and sizes, and that unleashed dogs and approaching a dog despite an owners’ warning are bad ideas. Tying a yellow ribbon on a dog’s leash signals that the dog should not be approached one woman stated. As a result of the post, dogless humans on the street now greet Knuckles by name during his walks.

“My post was motivated mostly by shame,” Koziol said. “I get so embarrassed when Knuckles freaks out on a walk. But then I felt deep shame because of his why. He isn’t barking to be disruptive or mean or because he’s not well-trained. He’s barking because he thinks he’s in mortal danger. But he’s not like this most of the time. I get to see who he is the other 90% of the time. The dog who just wants to sit with you, who is obviously thankful for us every day. Who loves nothing more than a blanket and sunny spot on the couch. I was blown away at the positive response, the shares and all that I learned. It was also nice to ‘meet’ people who have equally reactive dogs. We won’t be forming a club any time soon – but the virtual support system is great.”

While there are posts that go by every day and never garner more than a few likes, every once in a while a post can educate and engage a community. These conversations simply can’t affect the same change face-to-face but through social media, with the help of a cute picture of a dog, they can bring about change and help others.

Get a free Social Media Audit